The Governor of Illinois has proclaimed April 19, 2012 as a Day of Congenital Diaphragmatic Hernia Awareness! Thank you to the Rubenstein family for requesting this proclamation in honor of their cherub, Aidan Rubenstein.  His father, Neil Rubenstein, is the Illinois State Representative for CHERUBS and is leading the Chicago Parade of Cherubs on April 19th!  We also have the Peoria Parade of Cherubs on April 22nd led by Kristin Aigner in memory of her brother. 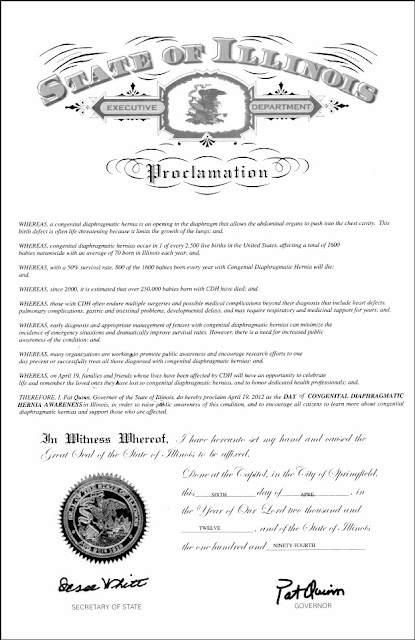 What is CDH?
Congenital Diaphragmatic Hernia (CDH) occurs in approximately 1 in every 2,500 births (1,600 cases in the U.S. each year).  The cause of CDH is not yet known.  The diaphragm is formed in the first trimester of pregnancy and controls the lungs' ability to inhale and exhale.  CDH occurs when the diaphragm fails to form or to close totally and an opening allows abdominal organs into the chest cavity.  This inhibits lung growth.
Every patient diagnosed with CDH is different.  Survival rates depend on the types and number of organs involved in the herniation and the amount of lung tissue available.  There are many surgical procedures and complications that may or may not occur with each individual, including in utero surgery.
Roughly 50% of babies born with CDH do not survive.   Of the 50% that do survive, most will endure long hospital stays, feeding issues, asthma and other problems.  A few of the survivors suffer from severe long-term medical issues.


CDH occurs as frequently as Spina Bifida and Cystic Fibrosis, yet there is very little research being done and virtually no media coverage.

CHERUBS is working hard to raise Congenital Diaphragmatic Hernia Awareness around the world.

Learn more about CDH at http://www.cdhsupport.org