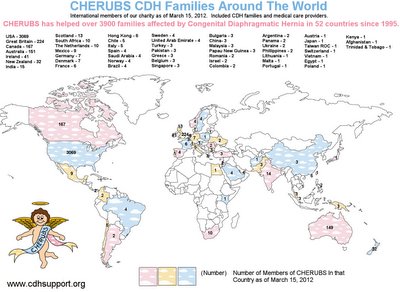 
CHERUBS has been priviledged to help over 3900 families affected by Congenital Diaphragmatic Hernia since 1995.   Our membership has increased drastically in 1 year from members in 38 countries to members in 52 countries on 6 continents.  Our membership includes families and medical professionals touched by CDH. 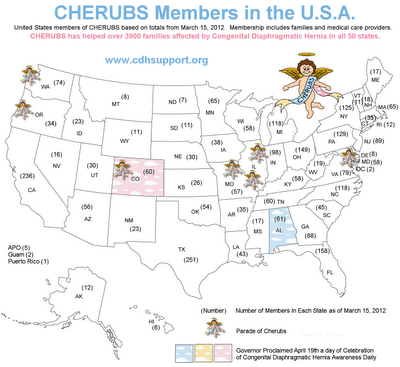 3069 members are located in the United States.  The map above shows the membership in each state, as well as highlights those states holding parades for April 19th, the celebration of Congenital Diaphragmatic Hernia Awareness Daily.

If you would like to talk to other families, please visit our free support forums at http://www.cdhboards.org

Also shown are those states whose governors have written proclamations for April 19th as of March 29th.   Several other states are in the process of confirming.   Thank you to all of our members who are writing their governors to help raise awareness.  We are thrilled at such a great response without promoting proclamations this year.  If you would like to get a proclamation for your state, it's as simple as going to your governor's web site and sending him / her an e-mail request for a proclamation, telling them about CDH and sharing  your story.  We ask that you please use the term "Celebration of Congenital Diaphragmatic Hernia Awareness Daily" rather than "Congenital Diaphragmatic Hernia Awareness Day" as that is trademarked by another charity.   Thank you for helping to raise awareness!!!